So here we are, on a plane from Kuala Lumpur leading to Siem Reap, Cambodia. I have never really fancied a trip to Cambodia, or even Angkor Wat for that matter, but when AirAsia announced their free flights promotion late last year, I decided to try my luck on finding free flights. 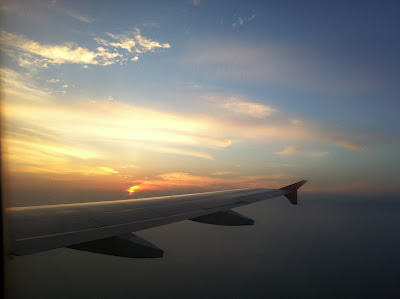 Knowing that this year would be a busy year, our trip to Phuket in February have been planned long before, our honeymoon to UK and Paris have also been planned since mid last year, I knew that an additional travel plan would warrant at least a minimal amount of spending money so we decided to go where a short trip wouldn't burn a big hole in our pocket, thus the decision was made on Siem Reap (although the low price of our tickets didn't hurt either). 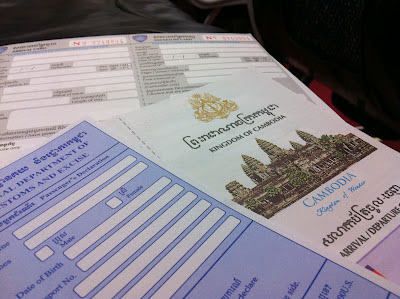 Arrival forms to be filled in by the time you land at the airport.


My initial thoughts on Siem Reap is that it's a small town. Was even informed by a friend that Siem Reap is kinda like Serian (a small town in Sarawak) so I didn't expect much. Suffice to say, Siem Reap is totally not what I expected. True enough, it is a small town, but it's not small enough that you can just walk your way anywhere. 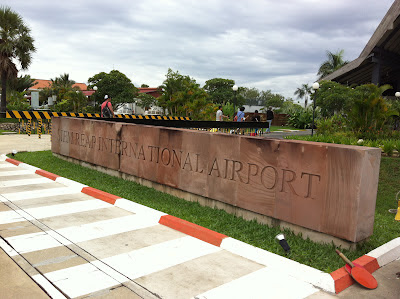 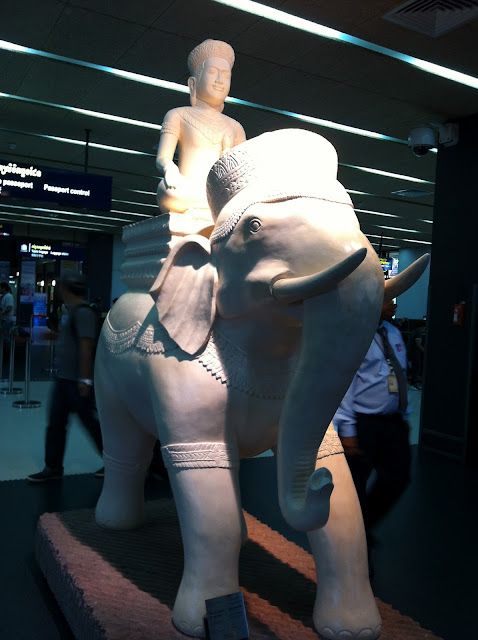 A huge statue of Buddha riding an elephant greeted us at the airport. 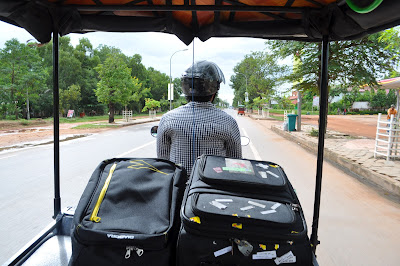 The hotel that we booked, Boutique Cambo Hotel provides free airport transfer and to my surprise, they sent us a tuk-tuk to pick us up. Although I've ridden a tuk-tuk before in Bangkok, I've never really gotten used to it. For the purpose of this trip, we've decided to rent the tuk-tuk for the whole three days that we were in Siem Reap and I would have to admit, riding that tuk-tuk was definitely one of the highlights of our trip.

And here's little bits and pieces of Siem Reap: 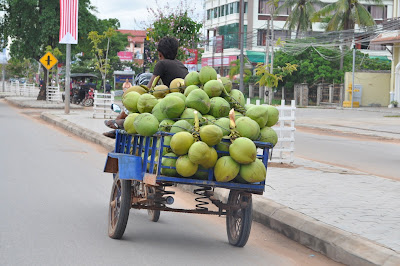 One thing I must say, these Cambodians are definitely hardworking, and they love their coconuts! I could see plenty of stalls selling fresh coconut juice everywhere! 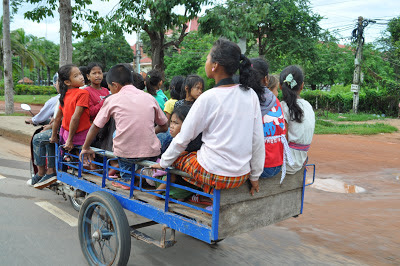 Innovation is the key to success. Thus, there's plenty of example where a motorbike has been innovated becoming the next easily available mode of public transportation. 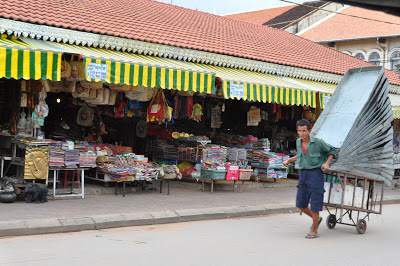 Hardworking. Need I mention more? This photo is taken next to the old market. 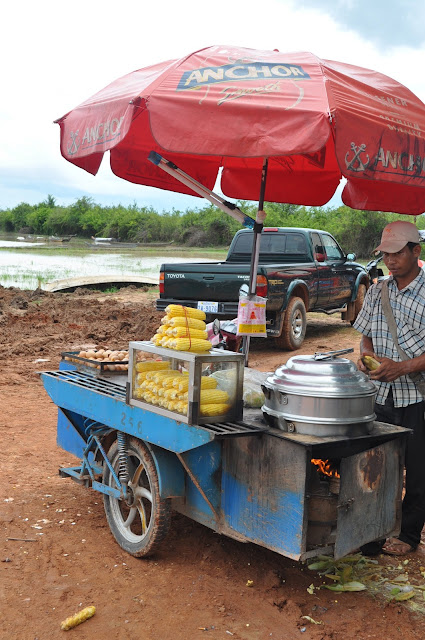 A hawker selling freshly steamed corn. Unfortunately I can't vouch for the cleanliness of the stall. It's located on the muddy road near the jetty leaving for Tonle Sap. 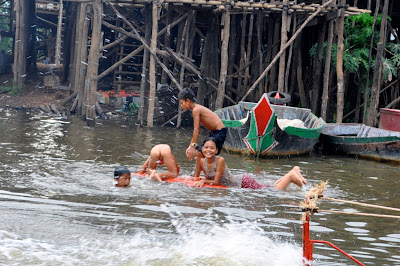 Kids playing in the water, Tonle Sap. And yes, one of the kids is butt naked. 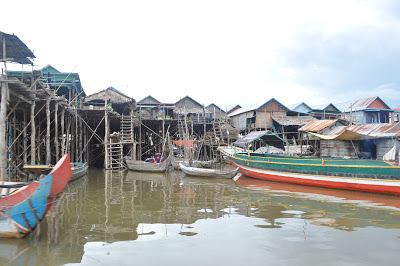 The village houses at Tonle Sap. 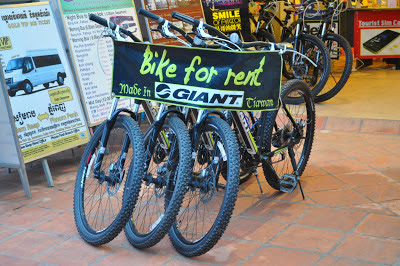 Since Siem Reap is pretty small, it's easy to get your way around the town on a bike (if you fancy the exercise). 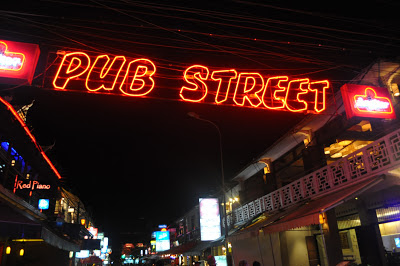 Pub Street. Aptly named due to the pubs lined next to each other all along the street. 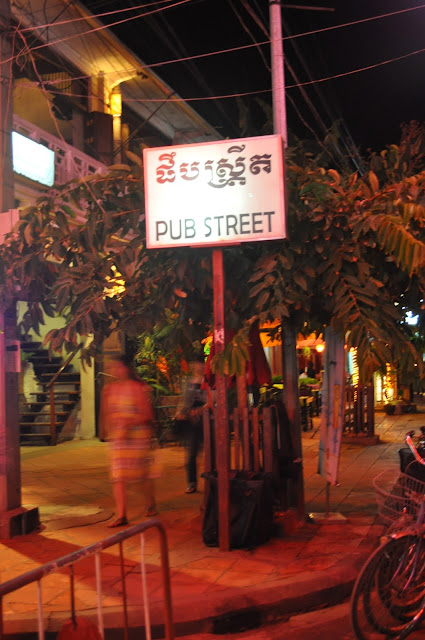 Pub street becomes a walking street at night thus tuk-tuks, motorbikes and bicycles can only park at both ends of the street. 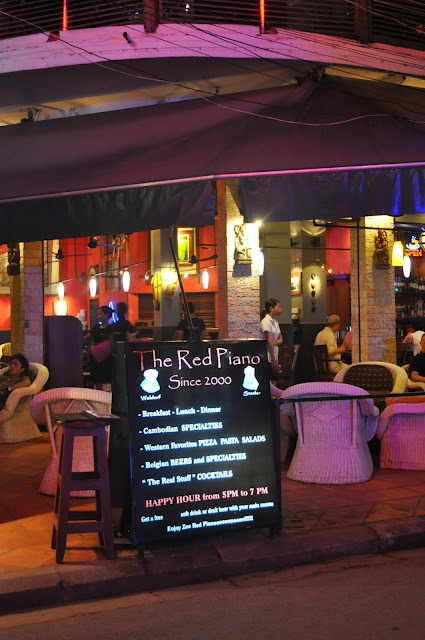 The Red Piano (located at Pub Street). It's said to be Angelina's favorite joint while she was here shooting for the movie Tomb Raider. 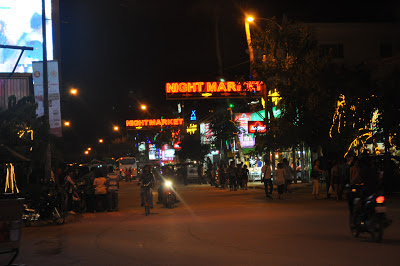 Among the shopping attractions in Siem Reap is the Night Market (which are open at night *duh*). 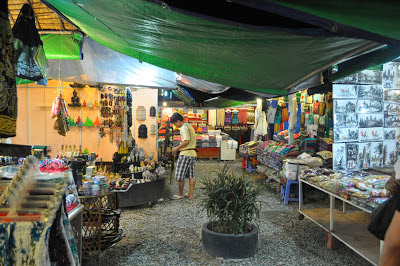 Plenty of wares being displayed at the Night Market. If you're thinking about shopping, make sure you stock up on your USD's because most things seems to be priced in USD rather than Cambodian Riel.

Had the pleasure of taking photos with some of the locals: 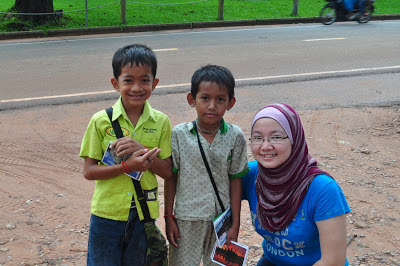 These two were actually selling postcards right in front of the entrance at Angkor Wat. Five postcards for USD1. Unfortunately we only had change for 1 dollar so we could only buy from one of them. We bought the postcards from the little guy in the bright green shirt and when the smaller one discovered that we weren't buying from him too, he cried (it really broke my heart to see him crying). 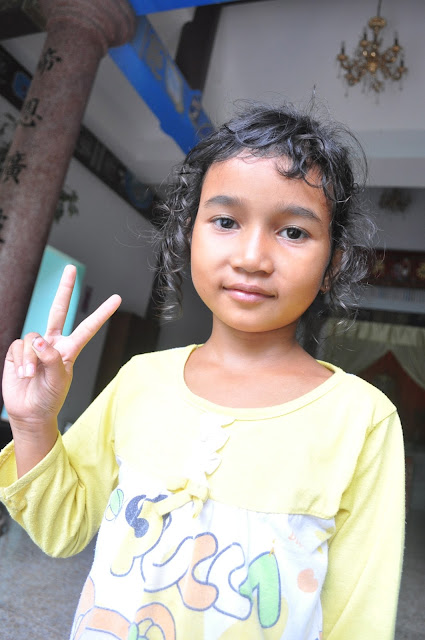 Met this little girl wandering around the premises of the Cambodian Cultural Village, playing all by herself. 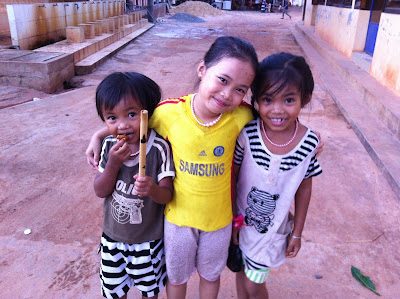 And these three little girls were playing right next to Neakmah Mosque at Stueng Thmey Village. 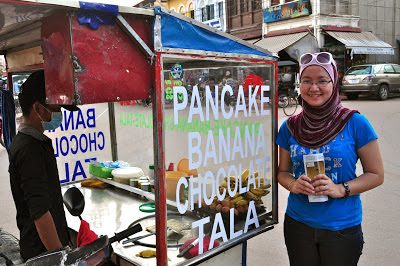 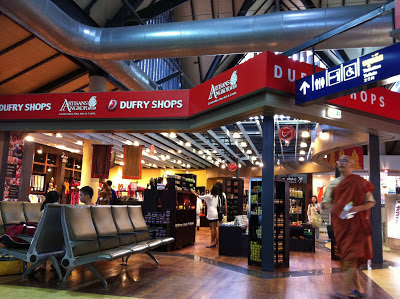 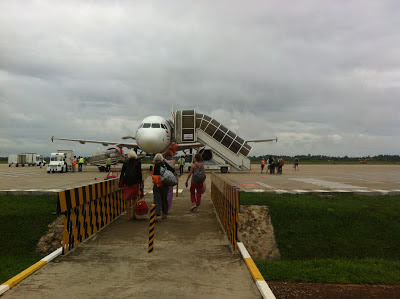 Good bye Cambodia. It certainly was a trip to be remembered. Am looking forward to completing my tour to all South East Asian countries, three more countries to go: Vietnam, Laos and Myanmar. I can't wait to visit them all!

Looking forward to sharing more of my journeys soon! Am sorry this post took a little while longer to complete, there was too much to do and I didn't have the time to sort through all the photos.

Posted by Unknown at 7:44 AM 2 comments: Links to this post